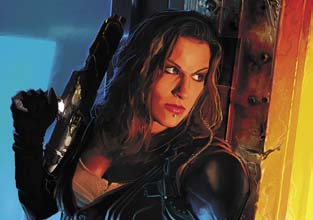 Martial Focus
The Commando is a living weapon, trained and honed to use his body to inflict pain and death. This translates into the Commando receiving a +1 to all attack, damage, grapple, trip, fortitude and reflex rolls. However, he may only have innate Kizen powers, and his total number of Kizen powers and Kizen pool are reduced by half, rounded up. Also, the Commando may not have any cybernetic enhancements, as they interfere with and can disrupt some of his more finely tuned trainings

Improved Unarmed Strike
The Commando is considered armed at all times.

Dodge
The Commando selects an opponent at the end of his turn. Until the beginning of the next turn, the Commando receives a + 1 DV bonus against that enemy.

Improved Grapple
The Commando receives +4 to all Grapple and Pin checks and does not provoke attacks of opportunity for doing so. Additionally, damage dealt by pinning ignores one half of the opponent’s damage reduction

Mobility
Provided that the Commando has his Dexterity bonus to Defence, he gains a +4 bonus to Defence Value against any attack of opportunity taken due to his moving in or out of threatened squares.

Stranglehold
The Commando deals an extra 1d6 damage while pinning an opponent, and the opponent must make a fortitude save (DC = 10 + Commando level + 2 per round the pin has been maintained) or lack out for 1d4 rounds.

Improved Trip
The Commando receives a +4 to all Trip attempts and does not provoke an attack of opportunity for doing so.

Combat Expertise
You may reduce your base attack bonus by up to -5 and increase your DV by the same amount for one turn.

Defensive Throw
If a melee attack is made against you and misses, you may make a trip attempt as a free action.

Fists of Steel
The Commando’s fists deal 1d8 lethal damage and their critical threat range is 19-20. Additionally, they ignore one half of the opponent’s damage reduction.

Combat Reflexes
The Commando receives a number of additional attacks of opportunity equal to his Dexterity modifier, but he may not use more than one of them per opportunity.

Earth’s Embrace
While pinning an opponent, you now deal an extra 1d12 of damage.

Whirlwind Attack
You may forfeit your full round attack action to take one attack against each enemy in melee range at your highest base attack bonus. You also forfeit any additional attacks you receive on your turn due to class features, feats, etc.

Bodily Control
The Commando may now add his Dexterity modifier to his grapple, pin and trip checks as well.

Prone Attack
You may make a melee attack while prone at no penalty, and if you are successful, you may get back up as a free action, Additionally, no one receives a bonus for attacking you while you are prone.

Expert Grapple
You receive an additional +2 to grapple and pin checks. Also, damage done by pinning ignores the opponent’s damage reduction and you may substitute an attack of opportunity with an attempted grapple.

Fists of Diamond
The Commando’s fists now deal 1d10 damage and have a critical threat range of 18-20. They also ignore the opponent’s damage reduction.