One Life, One Drought, by James Wylder 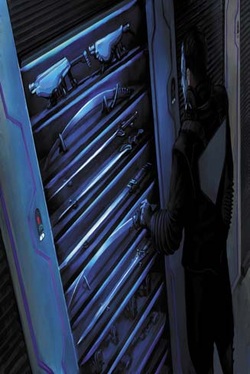 _ I had no great battle. I fought at Phobos, but that was just what anyone would have done, and the blood I sloshed through was shared by everyone else there. When we were free, and everything was Hunky-Dory, I didn’t feel that euphoria, I just sat down at my terminal and felt hollow. I am hollow. No one seems to get that. I’m not really here. Its not that I like what we’ve become, monsters with the calling cards of saviors who compromise at every turn in order to make sure we profit in the end. I don’t even care that we are now in league with every one I hate. We even made up with the guy who has been trying to murder us for a year.

No biggie. No worries. No cares. Nothing.

That’s what no one gets. This isn’t about revenge anymore, this isn’t about justice. Those fires died out long ago, and their embers were flash frozen until I wondered why I was breathing. It wasn’t that I didn’t like life. Yes it was. That’s exactly what it was. I am twenty-something. I used to be athletic and handsome, but that was a long time ago when I would sit with my friends on the concrete risers next to the trains and watch the red dust curl into swirling dragons. That was when I had a life. Now, I am just a plot device. A MacGuffin.

A man named Hitchcock once said that in order to drive the action of a film, all you need is something the characters are driven towards, something that solves some problem. I solved some problem. The thing is, Hitchcock also said it doesn’t matter what that thing is. You don’t even need to show it. It can be something inside a suitcase never shown on screen. And that is what I became.

Hiding on Larissa the only thing that stopped me from blowing my brains out was revenge, or justice, or some need to prove I could right wrongs. I didn’t. I was just picked up by a bunch of people who sort of did. They really did at one point, where they stopped the color-eyed-men from freezing Seyal and committing mass genocide, with me, and killed the Hierophant, however its all gone downhill since then. We’re fighting another war, another Phobos, another blood streaked death watch where we count off the civilian casualties as collateral. And I lost my purpose. What am I even doing here? I sound like an existential teenager. I don’t matter. I am just a small ripple in the big pond that is pointless metaphors. And when I tried to shoot myself some time ago, the only thing that stopped me was a face.

She wasn’t who I expected. I expected my fiancé, ex-fiance, dead fiancé, who I won’t see till I finally get the balls to pull that trigger. She was small, short, weak in comparison to who I’d loved before (but then again, I have atrophied into a twig), but she was there, and she noticed me.

I can’t even say how hard I didn’t notice her. Not intentionally. I just blot out everything. Somehow the idea of starting again is harder than the act of it. I still haven’t come to terms with it, I still have nightmares every single night I try to sleep, and stave those nights off as long as I can with caffenation. Hotaru, the vacuum salesman’s daughter, one step up the social ladder mom would say, but they gave up on me a long time ago. Not really of course, but in the general sense of knowing that they could actually convince me to start over with my life.

And so she met me. And I ignored her. And I slowly began to realize that maybe I was capable of actually showing some mild affection. One night it came out, briefly. Then more later. And for a brief time she wasn’t my background on my arm-pc anymore, and Hotaru was. And then there was tonight. And it was all set back.
“Ki San, I’m leaving.” I don’t even remember what I said after that. Except that I broke down crying, and begging, and when Hotaru left I went back to my room and locked the door, and paced and yelled and cried and deleted my pictures of her and damned myself for trusting someone again. And then I did it. I went to the drawer and unlocked it. I opened it, and reached in, wrapping my fingers around the handle. The barrel was sleek, the handle adapting to fit my grip. The whole thing was a work of careful construction, and as I touched it I was there, and he was there, and they all were there, and we were yelling, and someone said, “but I never knew there was one,” in such a casual tone and then the left side of his head exploded, and I looked down to see his right eye on my lap surrounded by a mosaic of brain and blood and bone. And like I had then, I put the gun to my head.

Sweet God, thank you, I thought. Please forgive me, for I am about to Sin.

I prayed for my sister. For my fiancé. For every friend whose corpse I’d stepped over. For Hotaru, for my parents alone at home. And I hoped God wouldn’t mind I was going out this way.

Unlike then, and the dozens of times before it, where I had convinced myself there was a reason, that the world couldn’t be as hollow as I saw it, I couldn’t see it anymore. There was no right way. No heroics. Just death, and the silent realization that there is no way to start over. I was empty. And I pulled the trigger. And I did again. And again. And I sat there, in my chair, alone.

I checked the gun. I’d never done that since Phobos. I just assumed it had stayed the same like me. It was corroded, the power cells had leaked into the rest of the gun’s inner workings, and every connection was broken or frayed. The mechanisms were broken or rusted or acid eaten. It looked fine on the outside, but was unsalvageable. I’d been putting that gun to my temple for years, thinking it might end my suffering, thinking it was the one thing that I still had that remained a constant. I was wrong, it was the same as me.

I threw it back in the drawer.

Of course I couldn’t kill myself. Hell doesn’t let you off that easy.

I shrugged, and took another sip of coffee. Hotaru had given me that coffee. I never actually had the heart to tell her I hated coffee. It was just a cheap way of getting caffeine. And I didn’t deserve to drink something I liked. It was fitting then that it was from her. I drank until I couldn’t stay awake anymore, and my body was numb to the caffeine. I woke up a few hours later screaming, the blood everywhere, my sister throwing it up across my lap, the squeal of Earther fighters across my head.

I was back where I belonged. Hell. I never deserved any better. And as I got back to work, I may as well have been on Larissa, pulling the gun out and shooting myself in the head, only to throw it back in my bag to pretend I had decided to go on living, and ignoring what I knew for certain every time, watching the stars form patterns, and seeing that there was no place there for me, in the heavens on in hell.